The housing crisis in Cambridge is out of all control. Private rents rocket as incomes fall in real terms. With 7,000 people on the councils housing waiting list getting a secure council home is a dream for many people on low and medium incomes. Meanwhile Cambridge has become a byword for an unsustainable housing bubble, the £413,383 average cost to buy a house in Cambridge is 17.5 times the average wage in the city. For all but the wealthiest or thrifty this is something most simply can never conceive of.

The Cambridge Property Exhibition is showing two figures up to Cambridge’s citizens. Mimicking the London style property shows that advertise safe investments for millionaires abroad leaving the ordinary people priced out. Unite the Union believes housing should be a basic right, not a tradable asset for the rich to profiteer off the rest of society. Yet this government has presided over a massive expansion of exactly that. We now know that one third of all houses sold off by the right to buy are now in the hands of greedy landlords renting them out at two to three times what council tenants pay. This Exhibition is a deliberate provocation by the estate agents, banks and lawyers against the citizens of Cambridge. That is why we say no more.
Cambridge Unite Community along with others is demanding everyone should have a roof over their head at a real affordable price.
We demand:
A rolling program of council house building until the waiting list of is cut to zero
A ban on rogue letting agents charging fees to tenants
Rent controls linked to incomes
A council home for everyone that needs one
A stop to property developers building unsustain unaffordable houses
A ban on estate agents advertising houses outside the city 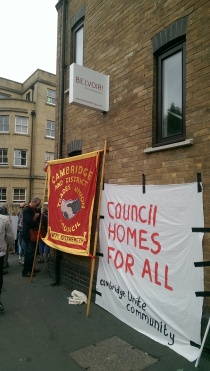